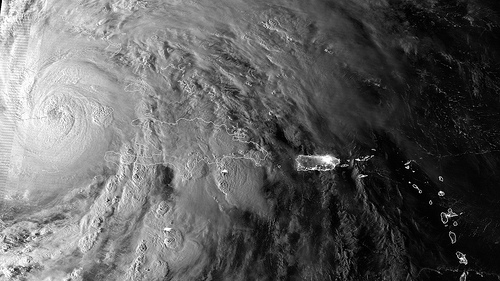 Named “Frankenstorm” by the National Weather Service, Hurricane Sandy is about to hit the Atlantic coast of the United States and wreak havoc in its path. Its impact is expected to be unprecedented. Photo courtesy of NASA Goddard Space Flight Center and Creative Commons license.

As the East Coast of the United States braces for impact by Hurricane Sandy, the question of whether you and your event are prepared for a major storm, inclement weather, power failure or other natural safety issues should be at the forefront of your mind. We often think of the financial repercussions to ourselves and our organizations when making cancellation decisions, but what about the impact on our attendees, and more importantly, determining when the peak impact of that decision may be on any and all of our stakeholders? How can we make sure that the decision strikes that delicate balance between those unhappy that the event wasn’t cancelled soon enough and those unhappy that the event was cancelled at all?

Just a couple months ago, the American Political Science Association was due to hold their Annual Meeting of 7,000+ attendees in New Orleans just as Hurricane Isaac was threatening the city via the Gulf of Mexico. On Sunday, August 26, after days of coverage following the hurricane’s potential path to New Orleans, the organization postponed the beginning of the conference to Thursday, just two days after the original start date. It wasn’t until that same Tuesday evening that the organization finally made the call to cancel the conference. This was after many participants, exhibitors, staff, and conference vendors had traveled to the conference in hopes to complete their intended schedule. International attendees, many who flew into the United States prior to the postponement, were stuck in a city being ravaged by a terrible storm. In the time between the postponement and cancellation, participants agonized over a potentially empty tradeshow floor, education sessions, and the possibility of one panelist needing to present findings sans the rest of his panel. Deirdre Reid of Reid All About It wrote a detailed account of her experience with the association and the effect the decision had on attendees online. APSA was widely criticized by the media and its own stakeholders for their seemingly haphazard approach to the conference cancellation.

Back to the present, this weekend is the the Marine Corps Marathon in Washington, DC, one of the cities’ most recognizable events, which this year will host more than 43,600 participants, and perhaps another 50,000 more volunteers and supporters. The marathon may very well escape the “Frankenstorm” threat, now being forecasted as rain beginning in the early morning on Sunday and its most dangerous impact being felt Sunday evening through Tuesday morning up and down almost the entire Eastern seaboard. Lessons should be learned from APSA’s tragic situation. Runners may be quite unhappy with any cancellation, and postponement may not be possible with the bureaucracy that surrounds city, county and state permits required for closing roads and preventing a maze of traffic concerns. But the most important question for any event during the time period of Sandy’s arrival, just before, and just thereafter, is whether the safety of their attendees will be jeopardized by either participation in the event itself or their travel to and from. As of Friday afternoon publishing time, the Marine Corps Marathon has not been postponed or cancelled. Events over four days are expected to run smoothly. But in the case that Sandy’s path is altered, or that potential damage is more severe than currently being indicated, marathon runners and their friends and families may be in an increasingly dangerous situation.

An argument can be made for several decisions; a cancellation at least a day ago, prior to when many would be traveling to the event, a cancellation tomorrow or early Sunday morning before the race begins, or just hoping for the best and being prepared for the worst as the race goes on. In my opinion, the late cancellation that often seems to be used in the event industry, especially one just a few hours before an event begins, is perhaps the worst possible choice. In that situation, your participants are in for a rocky time no matter what, and the hesitation to make a decision may have a more dramatic effect than you anticipated. Event organizers often see this choice as one that relieves them of the need for a backup plan and covers their own liability, but that is surely not the case.

There is not a clear day and time in many events when a decision about cancellation should be made. But we should be prepared no matter what the case. In the meantime, consider these tips in the event of an unforeseeable situation.

Good luck to any and every event planner holding an event over the next week on the East Coast. And just like the boy scouts say, “Be prepared!”

UPDATE: Information on weather conditions for the Marine Corps Marathon is available here.